Which Cities Are Safer Than Travelers Think?

Are there a few places on your bucket list that you have crossed off simply because you believe they are unsafe?

You might want to look at them again before completely giving up.

A new survey has found that many cities perceived as dangerous were actually relatively safe. Stratos Jets spearheaded a new study that looked at whether or not our perceptions—rather than facts—determined how safe or dangerous people thought a destination was.

Not surprisingly, some major metropolises that sometimes get a bad rap but actually are very safe.

What was the leading culprit for this? Oftentimes, it’s the media.

Of particular note, Stratos Jets found that Singapore, Bangkok, Kuala Lumpur, Istanbul and Mexico City were all much safer than people perceived. 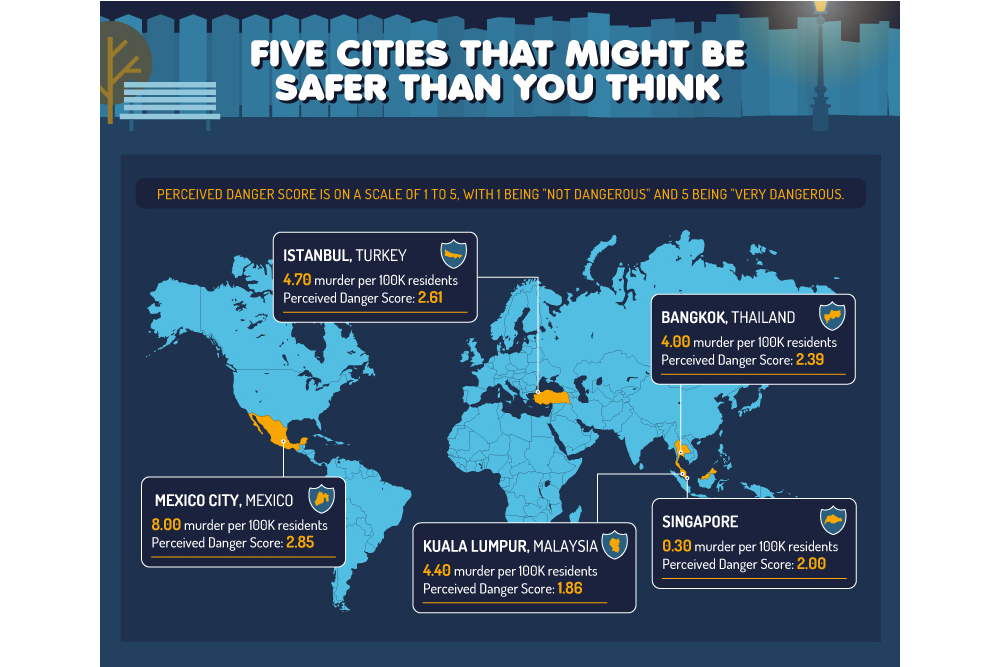 Why might Singapore get a bad rap despite the fact it’s a city with some of the strictest cleanliness laws in the world? Well, the film “Pirates of the Caribbean: At World’s End” showcases the (old) city as riddled with “swashbuckling pirates,” Stratos Jets points out.

Mexico City also is perceived as dangerous but, in reality, there are just eight murders per 100,000 people.

On the flip side, cities such as New Orleans are perceived to be safe, attracting millions of visitors—and rightly so—but the latter actually has more than 41 murders per 100,000 people. Still, the city was perceived as much safer than Tijuana, Mexico, in the Stratos Jets survey.

Tijuana, with 39 murders per 100,000 residents, was only perceived as safe by 6 percent of survey participants. New Orleans, on the other hand, had nearly 94 percent of respondents saying they would feel safer there.

When asked why they thought certain cities were more dangerous than others, respondents replied that the news was the biggest factor. Cities that were perceived as economically poor also made an impact as did the opinions of family members and friends.