WestJet doubles up on TripAdvisor awards 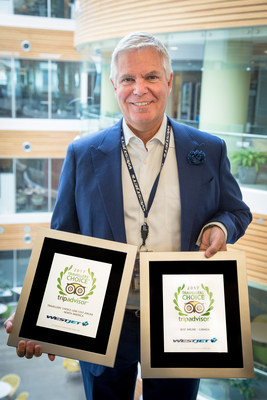 On the site, people rate airlines on several factors, including legroom, customer service, cleanliness, food and beverage and in-flight entertainment.

Just as with hotels, travellers also can give each airline an overall score between one (the worst) and five. Passengers may write short reviews of their experiences. Many of the largest airlines already have thousands of reviews.

The world’s travellers — at least those who write reviews and ratings on TripAdvisor -- chose Emirates, Singapore Airlines and Brazil’s Azul Airlines as the top three global carriers.

"We are truly honoured to be recognized by TripAdvisor, the pinnacle of global online travel reviews," said Bob Cummings, WestJet Executive Vice-President, Commercial.

"This acknowledgement, based on authentic reviews from the travelling public, reinforces the difference the commitment, dedication and hard work of 12,000 WestJetters makes."

Costa Rica Family Journey: From Rainforest to Coast
Wonders of Britain and Ireland First Look 2019
Golden Triangle
Sicily in Depth (Preview 2018)
From the Danube Delta to Prague with 2 Nights Berlin & 2 Nights Transylvania
The Seine Experience - U by Uniworld (On or above deck cabin, start Paris, end Paris)