The newly-reimagined public spaces of the Waldorf Astoria—a building that sought to bring radical change to the social strata of New York—will be designed by Skidmore, Owings & Merrill (SOM) Architects and Pierre-Yves Rochon, whose portfolio includes the Four Seasons George V, the Shangri-La in Paris and the Savoy in London.

Mr. Yves-Rochon's vision for the landmarked interior spaces is to “preserve the sense of nostalgia of the Waldorf with a modicum of modernity.”

When the Waldorf officially opened its doors in 1893, followed by the Astoria in 1897, it became a magnet for anyone who was anyone. With its 550 rooms, Art Deco skyscraper and “manufactured weather” thanks to its state-of-the-art cooling systems, this was the original “city within a city” as it was called. And it had just about everything: a spacious reading room, cigar lounge, photography studio, rooftop ice-skating rink, palm court, roof garden, even as a florist.

At that time, it had more varied activity than any other skyscraper had ever contained, including a dedicated telephone switchboard, an automobile elevator, room service, as well as radios in each room.

It even had its own 90-foot drive parking space! 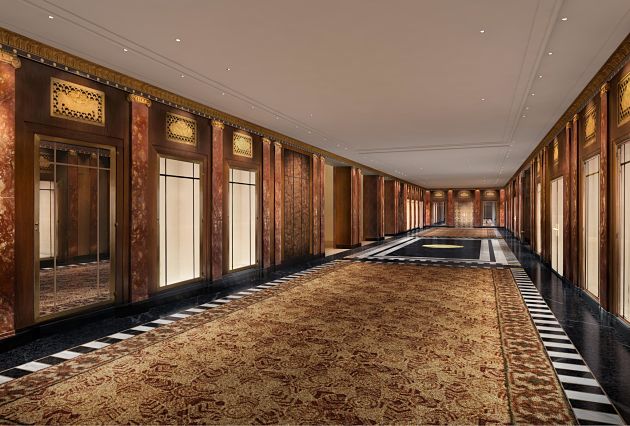 So naturally, anyone who was anyone wanted to stay there. Cole Porter wrote “Anything Goes” in 1934 while living at the hotel. Frank Sinatra performed in 1944 at the Wedgwood Room. The first Tony Award ceremony took place here, in 1947. Grace Kelley’s engagement party too, was a celebrated and well-attended affair in 1956.

It also had its share of ups and downs, as modern celebrities in the 1960’s including the Beatles veered towards the other Hilton flagship property on Sixth Avenue. 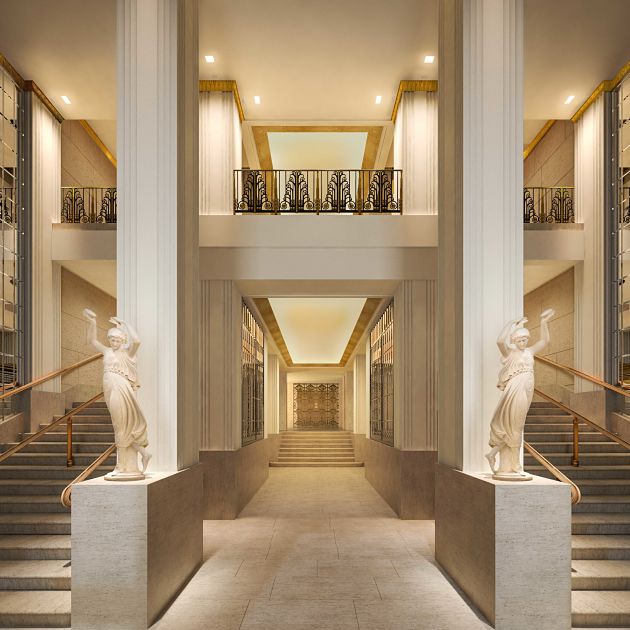 Yet, the Waldorf Astoria’s much talked-about interiors never quite faded, including today. The famous nine-foot-tall “clock” that was added in 1962 in the lobby center was a gift from Queen Victoria to America to commemorate Columbus’ discovery of the continent. It made its debut at the World’s Fair in Chicago in 1893, and it will still be there with the new redesign.

To usher the Waldorf into the 22nd century, the building’s period materials of limestone, as well as its signature “Waldorf-gray” bricks, will be preserved and polished. Guests will still get access to public spaces from the reading room, photographic studio, roof ice-skating rink and dining areas including Peacock Alley.

A newly-imagined foyer, which “invites guests to really linger”, will preserve the restored Louis Rigall “Wheel of Life” mosaic (now well-worn for the wear), as well as the four stately Grecian urns on gilt mounts—they shine like markers—and modernized Doric columns with bronze moldings. The color palette of this new foyer will be a lot softer than the original, so as to give the ambience a cathedral-like airiness.

“What I would really love is for guests to come to this foyer, and just soak it in,” says Yves-Rochon, who follows in the footsteps of the original lead designer, Lloyd Morgan. The latter also designed the Biltmore Hotel in Los Angeles, the Breakers Palm Beach, the Sherry Netherland, and the Hotel Pierre.

It is a place where time stands still, a symbolic enclave for visitors to get an Alice in Wonderland feeling, a place to really savor a coffee or cocktail.

Peacock Alley will preserve its custom-designed carpet, with new burl wood panels and marble columns to transport guests into the 1930’s era of debutante balls and diplomatic gatherings.

Guests will be treated to a raised Park Avenue foyer that is to receive a palette change to an eggshell cream color, with backlit panels, urn light fixtures on gilt mounts, glass and nickel bronze doors and a lighter plaster. The original but refreshed St. Victor rose marble in the center of the ceiling gives the foyer semi-indirect lighting.

The exterior of the Waldorf will receive an equally intense facelift, with its recessed bay windows and 141 spandrels in three patterns across the facades being restored.

“The one big thing to note is the lighting,” says Yves-Rochon. 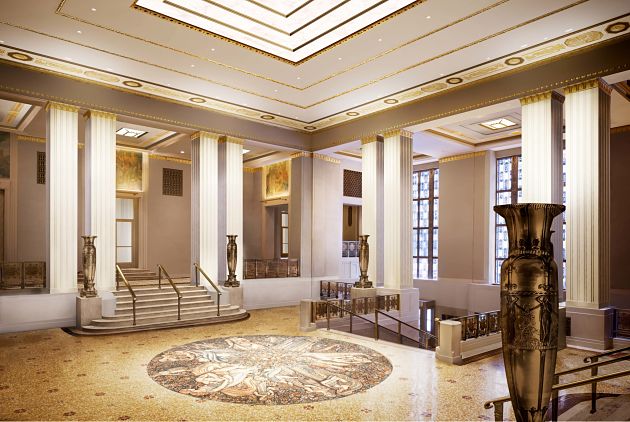 So expect the sconces, reading, table lamps, chandeliers and the light from backlit panels in the ceiling to be fresh while retaining the period style of the 1930’s.

Two new marquees will be added to the Park Avenue entrance, including the one to the hotel entrance since the property will be split into condos and hotel rooms (the current marquee will function as the communal entrance into the lobby). 5,380 double-hung windows with new glass will be installed with the appearance of how they were in the 1930’s, and the bronze entryways, marquees and lanterns will be polished to glow like haloes.

All these renderings are pending approval of the New York Landmarks Preservation Commission, and the hotel will still be operated by Hilton as part of a 100-year-old agreement.