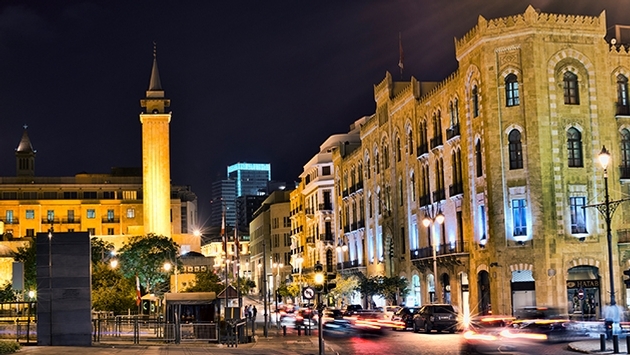 Fall is almost upon us. Destinations are emptying of summer revelers, people are returning to regular work schedules and children already back in school.

For those who can escape during this typical “shoulder season,” the fall brings its own set of unique destinations to explore.

A new American Express Travel Forecast looks at internal booking data for the fall season and has some of the answers for those wondering where to go.

The data shows that travelers interest's span the globe among some surprising destinations rising to the top.

Beirut is back on bucket lists, and Tel Aviv is making a comeback as well: Interest in both destinations is up nearly 150 percent.

“Cognizant of today’s geopolitical climate, Americans are shifting the conversation from apprehension to understanding and are openly exploring destinations in the Middle East—tourism is booming, airlines are creating more routes, it’s never been a better time to visit these exotic gateways to culture,” said Jamee Lubkemann, vice president of American Express Travel.

Beirut’s surge in popularity is well-deserved. The country is known as the Paris of the Middle East and is one of the world’s oldest settlements.

Tel Aviv is also not a surprise to forecasters, as many are calling it the “Dubai for avid travelers,” according to American Express Travel.

Lubkemann also noted it’s not surprising to see other off-the-beaten-path destinations rise to the top.

“As the act of travel becomes less of an ‘if’ and more of a ‘when’ for today’s travelers, far-off African destinations are seeing an uptick in bookings as Americans get more knowledgeable and curious about discovering untraditional places,” said Lubkemann.

Destinations such as Nairobi, Kenya; and Casablanca, Morocco are drawing visitors.

Interest in Casablanca is up 86 percent attributed to the lure of culture, souks, Mauresque buildings, spice markets and a thriving port city of Casablanca. Nairobi is becoming a tech hub in Kenya and has evolved to a stunning gateway for travelers on African safaris. More visitors to Nairobi are interested in staying longer to enjoy its budding food scene.

While new destinations are emerging, old ones are regaining popularity as well. Interest in Paris and London is surging as are destinations in Americans' backyard such as Mazatlan, Mexico, and Belize.

Interest in Mazatlan has surged 82 percent as the city and surrounding areas have become a haven for the creative class who flock to the city’s historic old town.

Belize is also experiencing an influx of visitors due to a growing interest in Mayan culture as well as ongoing visitation to what are arguably some of the world’s best dive sites.

A favorable exchange rate continues to drive visitors to London as the city further ups the ante for those who flock to trendy Shoreditch, check into luxury hotels such as the new Shangri-La Hotel At The Shard and enjoy some of the world’s hottest new restaurants.

Nothing can stop the City of Light, either. The American Express Travel Forecast showed that bookings to Paris were up 55 percent, possibly driven by the reopening of famous hotels such as Hotel de Crillon and the Ritz Hotel.

“Redefining the word ‘tourist’ for a new generation of North American jetsetters,” noted Lubkemann, “luxury travelers still seek tried and true destinations where there is always something left to uncover.”