Dine Above Denver From an Air Traffic Control Tower

While Denver is undoubtedly among the most imaginative cities in America, the Mile High City has officially taken its creativity to new heights. Literally.

According to CNN, the abandoned air traffic control tower at the now-defunct Stapleton International Airport has transformed into a trendy restaurant and entertainment space.

As of this month, Punch Bowl Social is open for business, giving the tower a purpose for the first time in 22 years.

Once used to direct flights into and out of the Colorado capital, this one-of-a-kind 32,000 square-foot space is now serving up diner-style food, bowling, karaoke, darts, arcade games and some of the best views in Denver.

"It was an exciting opportunity to give back to our home state of Colorado, and these are truly the last assembled bricks of the old airport that was so omnipresent in Denver for decades," Punch Bowl Social founder and CEO, Robert Thompson told CNN Travel.

"Designing and reusing a former airport tower is a once-in-a-lifetime opportunity to enhance an iconic municipal structure while revitalizing that which was once abandoned," added Rebecca Stone, managing principal at OZ Architecture. 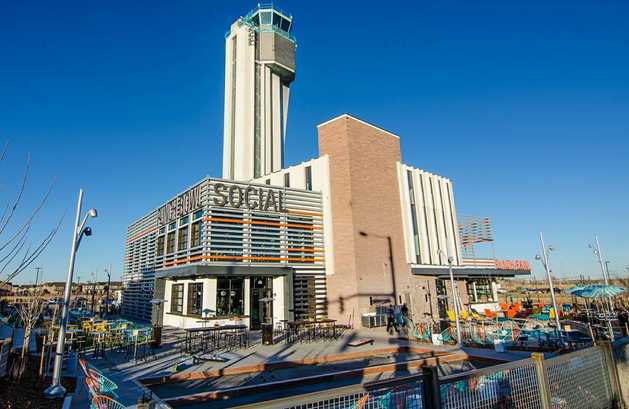 Despite the numerous challenges it presented developers, the tower's historic exterior remains intact and was repurposed for the interior walls.

"Maintaining [the tower's] height and design honors its historic significance, but the height and design were also limiting in some ways, so we needed to develop more creative and unusual ideas for how to use the space," Stone told CNN.

Inside the tower, design elements and menu items pay homage to its unique history. There is even a craft beverage dubbed the "Aviation."