11 HOT THEME PARKS OF THE FUTURE

Ever wanted to fly on the back of a banshee, sail through a bioluminescent jungle or climb a floating mountain?

Well, 2017 is your year, thanks to the opening of Pandora -- The World of Avatar, a new extension to Disney's Animal Kingdom in Florida that recreates the vivid alien world of the blockbuster sci-fi movie "Avatar."

Not enough theme park thrills? There's more to come as construction gets underway on hot new adventure experiences around the world.

To get the lowdown on what to expect, we caught up with The Theme Park Guy, aka Stefan Zwanzger, a man whose roller coaster career has so far taken him to more than 350 parks in 150 countries.

Here are his highlights: 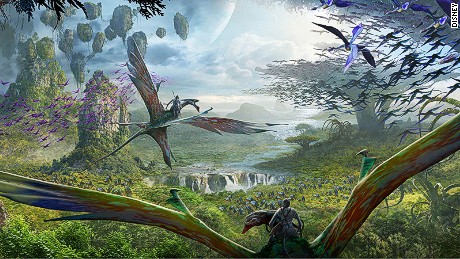 "Avatar" director James Cameron has been deeply involved in the design of the new Pandora theme park.

What: A theme park re-imagining of the lush and leafy moon from "Avatar," the CGI-rich 2009 blockbuster movie from director James Cameron that gave us the best race of fictional blue people since The Smurfs.

Where: The park will be an addition to Disney's Animal Kingdom, part of the vast Walt Disney World Resort, near Orlando, Florida.

Zwanzger's verdict: "This looks really fantastic. I haven't experienced it yet, but this could really be a groundbreaking experience in terms of ride and theming.

"It's always good to have a very talented film director at the helm of new attractions, and James Cameron has been deeply involved in this.

"He's done incredible rides in the past. Terminator 2 3-D at Universal Studios was one of the best attractions of its time, and that was 20 years ago -- it's still a fantastic attraction today.

"Cameron is known as a perfectionist, which is exactly what theme park attractions need to make sure visitors really experience something immersive, down to smallest details."

What: Long-awaited (it was first announced in 2009) big franchise rival to Disney's recent Shanghai opening. Expect a Harry Potter section, other Universal favorites plus new rides.

Status: Under construction. Opening expected in 2020.

Zwanzger's verdict: "There's a lot of theme parks in mainland China, but most of them are really, really bad.

"They have no soul, no heart and even though they have imported quality rides, they are depressing copycats -- it's a fake Mickey Mouse in the smog. 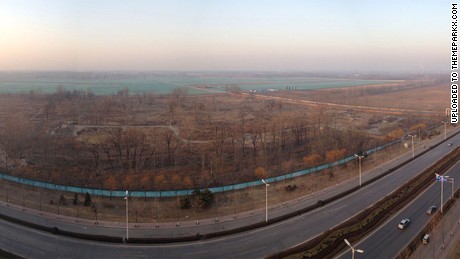 "I've been to parks that were just recently opened that are empty. Fantawild Qingdao, for instance, was the emptiest place I ever found in China, with more staff than visitors.

"But the Chinese have embraced Shanghai Disneyland and I'm sure they'll embrace this one too. Let's not forget, there are still visa headaches for mainland Chinese wanting to travel internationally, and when you look at the numbers it's evident that world-class entertainment facilities on their own soil will prove a success." 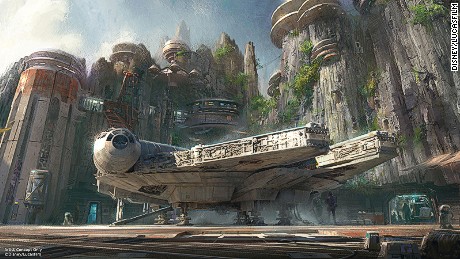 Zwanzger's verdict: "Who is more well known, Mickey Mouse or Darth Vader? It's a good question. 'Star Wars' is iconic -- a movie from 1977 that is still relevant in 2017, it's quite incredible.

"I believe Disney will do a good job, although it's too early to see what they're doing and how big it'll be.

"Personally, I think 'Star Wars' could easily be a separate theme park -- one that's 'Star Wars' right from the entrance up until the exit. That would be much more powerful.

"When it's just a land, part of another park, it really changes the experience. But imagine if the entrance was a crashed Millennium Falcon, and once you're inside Star Wars land, you wouldn't see anything that isn't 'Star Wars.' That would surely be a big hit. Fans would want to sleep on site.

"Maybe Disney will consider it when they see how successful Star Wars Land will be. I'm sure they've already considered it." 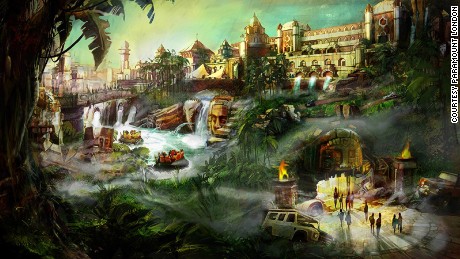 The designs for Adventure Isle, a section of the planned Paramount London theme park.

What: Loudly hyped $3.2 billion theme park west of the UK capital that would likely include "Indiana Jones," "Star Trek" and "Iron Man" rides, if it ever gets built.

Where: Swanscombe Peninsula, east of London.

Status: Potentially 2022, but despite being announced in 2012 the deal is far from sealed. Discussions are still ongoing with investors, officials and residents in the area and plans are expected to be submitted in November 2017.

Zwanzger's verdict: "The big question is, will it happen? Let's wait and see.

"It's very ambitious. If it happens it'll be the UK's most cutting-edge theme park and one of the biggest new theme parks to be built in Europe."

What: Mountaintop theme park adjacent to Malaysia's only casino that'll likely include rides and attractions inspired by Fox properties such as "Ice Age," "Rio," "Alien" and "Night at the Museum."

Status: Also plagued by huge delays, this is now rising from the ground and is forecast to open in 2018.

Zwanzger's verdict: This started out as a casino operation with the only casino licence in Malaysia.

"They used to have a very third-rate theme park with painful rides -- you went on them and it really hurt -- but finally shut it down to make way for this expansion.

"The casino itself is like a haunted hospital up in the mountains, populated by dedicated gamblers, posing as a family destination. 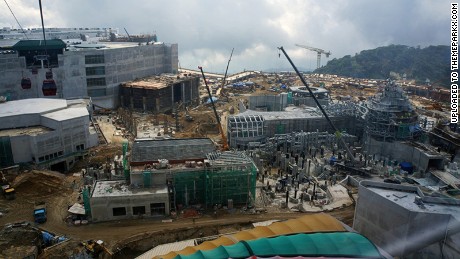 "It's one of the most depressing places in the world today, but maybe this theme park will help.

"The problem is, whatever theming they put there won't hide these very ugly '70s-style casino hotel skyscrapers.

"At the same time the location is very stunning, it's on a mountaintop and therefore one of the few places in Southeast Asia very close to the equator where you can get some fresh air. I hope this Fox park makes the most out of it.

"Will it be a truly stunning experience that'll be truly immersive? Given the surrounding setting, I have my doubts. Will it be better than the park that was there before? Yes, 100%." 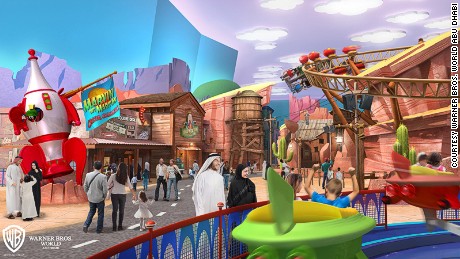 What: One of two new prestige properties to add to the UAE's already saturated theme park landscape [See SeaWorld Abu Dhabi below]. The indoor park's rides and attractions are likely to draw inspiration from DC Comics and Looney Tunes cartoons, among others.

Zwanzger's verdict: "The UAE have hugely overbuilt on theme parks. Last year five were opened simultaneously in Dubai at the same time as an expansion of Ferrari World Abu Dhabi kicked in.

"It's great to have big ambitions -- build it and they will come -- but there are also realities, and the UAE has overdosed itself on theme parks. 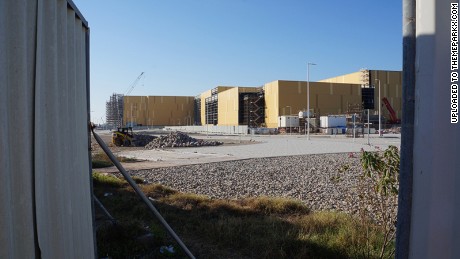 "It's great for attraction lovers, though. Right now, queue times midweek at these parks are just five seconds.

"I hear good things about Warner Bros. Right now there are two Warner Bros.-branded parks, one in Spain and one in Australia. They're not bad. Not on the level of Universal and Disney, but with this UAE park I think they are trying to leap to a new level of quality and experience."

What: First park to carry SeaWorld branding beyond the United States, where controversy over orca whale treatment has hurt attendance numbers in recent years.

Status: Opening planned in 2022, but still no progress on construction.

Zwanzger's verdict: "The UAE has a lot of theme parks in the pipeline, Fox, Six Flags, Warner Bros., IMG Worlds of Legends. For sure there will be canceled parks. 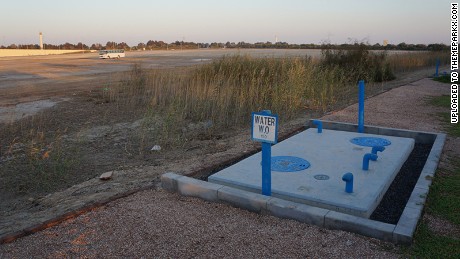 "There might even be major theme park closures within a decade, if they are not careful now and slow down.

"We'll see if SeaWorld ever sees the light of the day.

"I have huge doubts about further announcements in the UAE, it'll be challenging enough to maintain what they've already built."

What: The richest man in China, billionaire Wang Jianlin, continues his mission to make his Wanda Group the largest theme park operator in China, spending billions to open new venues across the country.

Zwanzger's verdict: "I have to admit that so far I haven't been to a Wanda park, but from what I hear and see is they're not particularly unique -- big budget doesn't necessarily mean you have a story to tell.

"I'm not sure if the new parks will be as depressing as the existing ones in China. Wanda is investing in Hollywood studios and is really determined to be a major theme park player in China and, who knows, maybe even abroad.

"But what we've seen so far lacks uniqueness.

"If you are committed to really creating a good theme park, you should put a message inside. For example, Germany's Europa-Park has done it well. They have created a united mini-Europe faster than the EU.

"Wanda parks are bombastic, but like so many other Chinese theme parks they appear to lack warmth. Disney's great USP is the warmth and love it puts into most of its parks. They're very warm, cosy, memory-driven family experiences." 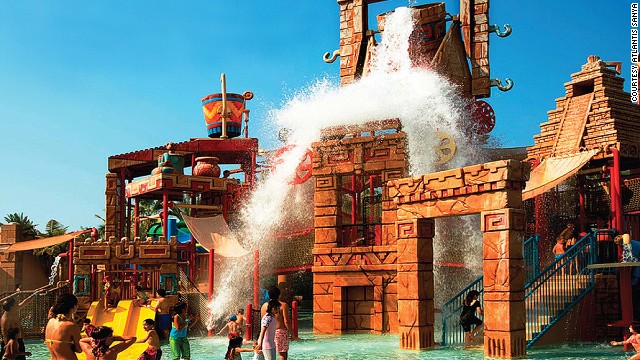 Kerzner, developer of Atlantis Resort Sanya, is known for its top-notch water parks.

What: A $1.6 billion beachside aquapark, entertainment and hotel complex styled along similar lines to successful Atlantis resorts in Dubai and the Bahamas.

Zwanzger's verdict: "This is being built by the Kerzner group, which is building fantastic resorts with impeccable, top-notch water parks and aquarium attractions.

"Kerzner is one of very few players in the industry which is absolutely up to Disney and United Studios when it comes to attractions. They're committed to surprising and impressing, and they're really wowing their customers.

"I believe this new Atlantis will be awe-inspiring as usual and raise the standards for such attractions in China.

"It helps that Hainan is not depressing at all. I have been there, it's a blue-sky island next to Vietnam with lots of luxury properties -- a Dubai for Mainland Chinese tourists.

"I have really no doubts about this working out, it's going to be a hit!"

What: A reported $4.6 billion enlargement to what many consider Disney's best-ever park. New attractions include a "Beauty and the Beast" land and Tomorrowland.

Zwanzger's verdict: "This already is, in my opinion, the best theme park resort in the world. It's the most magical, stunning artificial destination ever created on this planet.

"Particularly DisneySea, it's a Disney Park that has its own identity, you rarely see the mouse walking around there. The volcano, the atmosphere, the attention to detail -- It's absolutely awe-inspiring. 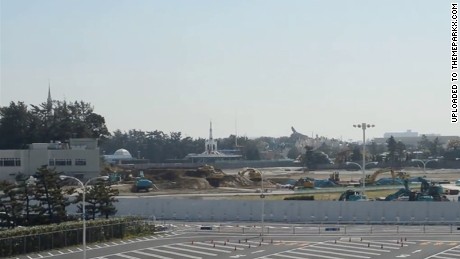 "The resort is owned by Japan's Oriental Land Company, which you can see and feel has a huge commitment to this resort and its operations, and the expansion will no doubt be done with the utmost care.

"For me, this place is the peak of playful human architecture and the designers and engineers who built it almost 20 years ago have my deepest respect."

What: The Russian capital has long been eyed as an untapped gold mine for movie-themed parks. After announcements and delays involving several major players, Universal could be the one to finally happen.

Likely to be indoor, it would be part of a larger mall and entertainment complex.

Status: First announced in 2012 and no work underway. Currently scheduled for opening in 2022.

Zwanzger's verdict: "I know design for this project was in the very advanced stages, there were a lot of people working on it. I don't know what is happening right now, it might just be delayed and will come to life later. Maybe the delay is related to the current state of US-Russia relations. I hope not.

"As it stands, Universal would be the second major indoor theme park in Moscow (another one, Dream Island, is currently under construction) and only the third proper theme park in Russia.

"I'm very sure if they build quality and do good work -- with the city being so big and the competition being so little -- this will be successful.

"There's really a lack of theme parks in the entire of eastern Europe, not only Russia, but everywhere, Kazakhstan, Belarus, Ukraine, Poland, the Czech Republic...

"If you draw a straight line between Germany and China there's almost nothing. This Moscow development would help fill the gap."